Mike Leonard is what we call a “golf junkie”. He makes his home in Olympia, Washington just a couple of hours north of Portland. Mike is known for frequenting the local thrift stores and pawn shops in search of old golf clubs and artifacts. It was just a few weeks ago that he stumbled across what he called “the holy grail of golf sets”. Back in the corner of a local store, stashed behind multiple golf bags, he saw something that caught his attention; a special edition Scotty Cameron putter along with brand new Taylormade irons and woods stuffed into - you guessed it - a MacKenzie.

This $2500 set up was his for the taking, $220 and he was out the door. Too good to be true is a gross understatement. “The MacKenzie alone would have been worth the purchase price,” Mike explained. “I have owned a handful of the bags over the past 20 years and I still carry a Crimson and Gray MacKenzie-Jacobsen bag with the words GO COUGS on the side as homage to my alma mater, Washington State.”

Of course Mike made the purchase, who wouldn’t. However, he did so with a suspicion that the golf bag may have been stolen from its original owner. Upon returning home he emptied out the bag and began an investigation. Inside the ball pocket he found a wooden name tag labeled 'Andy Lytle'. It was from an event Andy had played in at Pumpkin Ridge located in Portland.  This was the first sign that the bag wasn’t far from its original owner.

After a Linkedin and Facebook search, Mike came across a couple of Andy Lytles. He was clever enough to notice a Facebook post one of the suspects had made in February supporting the Children’s Cancer Association. Low and behold, embroidered on the outside of Andy’s golf bag was the Children's Cancer Association logo. Detective Mike Leonard had solved the case.

Just after Christmas Mike and Andy met up in Seattle to return the lost MacKenzie to its rightful owner. “As much as I would have loved to keep the set, it just wouldn't feel good to know someone else may have had them stolen,” explained Mike.

Good deeds don't go unnoticed. Andy was so grateful for Mike’s efforts that he bought a brand new MacKenzie for his guardian angel, whatever Mike wanted. Thank you for giving us a chance to share your story Mike and Andy. You two are the quintessential MacKenzie customers. 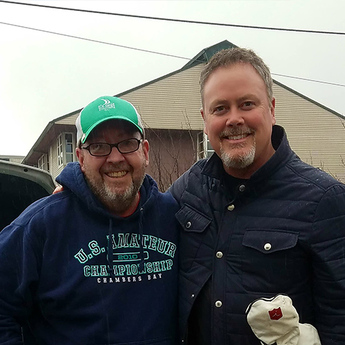